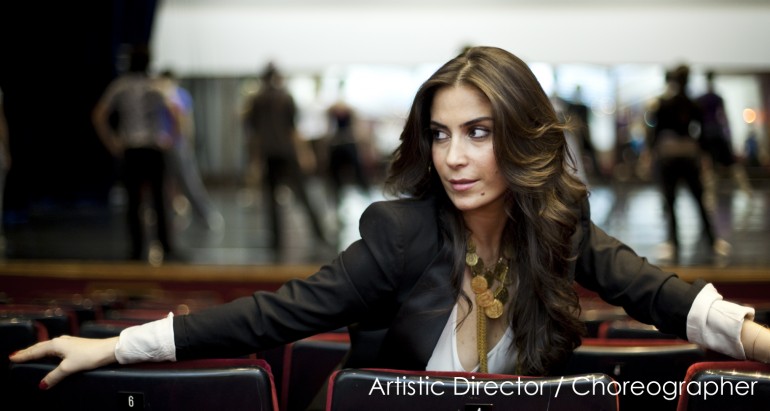 Alissar brings an innovative spirit to the unique Caracalla technique with her creative choreographic style. She debuted with Caracalla Dance Theater having choreographed “Elissa Queen of Carthage” and has received much acclaim for her latest productions of “Villagers Opera” and “Kan Ya Ma Kan.”

Alissar’s education started in London at a very young age and was followed by her earning two BA degrees, one in Dance education and the second in International Communications from Loyola Marymount University, U.S.A., followed by an MFA in Dance Theory and Choreography from the University of California, Los Angeles.

Her theatrical and dance experience has been notably enriched by her studies as well as working closely with her mentor and father, Abdel-Halim Caracalla. She enthusiastically continues her journey with the Caracalla Dance Theatre.

Alissar has also received acknowledgment as the leading choreographer of the hit reality TV show, Star Academy seasons 1-9, as well as her appearance as a judge on “So You Think You Can Dance Middle East”. The audience experienced her vast choreographic talent not only in Style Caracalla and Folklore, but also in Jazz, Hip-Hop, Contemporary Modern and Commercial Jazz.

Her knowledge of TV and commercial work was gained through her extensive studies at the Edge Performing Arts Center, Hollywood, where she studied under leading names in the commercial dance world.

Home to a warm and inviting dance community, our theatre thrives with the support of our dedicated students, loyal parents and ambitious dance lovers. Our space offers 3 fully-equipped dance studios, a main stage, a dancewear boutique, a cafeteria, a VIP welcome room and a costume workshop. Unlike any other theater in the region, Caracalla Dance Theater offers a cozy atmosphere where parents, students and young artists come together to be part of the unique Caracalla cultural identity. The theater is also home to the dance company, an advantage which gives students the opportunity to see the Caracalla Dance Theater in rehearsals, show preparation and performances, in addition to offering them the privilege of going behind-the-scenes of an artistic institution.